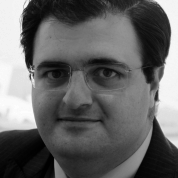 Abdulsalam Haykal is the CEO of Haykal Group, which includes activities in print and online media, enterprise software, and mobile technology.

Abdulsalam serves on the Board of Trustees of the American University of Beirut, and of University of Kalamoon in Syria, and on the President’s Advisory Board of the EARTH University in Costa Rica. In 2009, Abdulsalam was named a Young Global Leader by the World Economic Forum. He is a member of the WEF’s Global Agenda Council on the Future of the Middle East. In 2010, he represented Syria at President Obama’s Entrepreneurship Summit in Washington, D.C., and in 2012, he was profiled in Arabian Business magazine’s annual list of the 500 Most Influential Arabs for his work to boost entrepreneurship in the Arab world. In 2014, he received the Arab Innovation Award for his work on the Arabic online content gap.

Abdulsalam was born and raised in Damascus, Syria, and now resides between Abu Dhabi and London. He is the co-founder and president of the Syrian Young Entrepreneurs Association, and the founder of other NGOs focusing on education and youth empowerment. In 2013, he co-founded Syrian Entrepreneurs Worldwide, a virtual eco-system to help Syrian entrepreneurs relocate and start up in their adopted homes. He holds a BA in Political Science from the American University of Beirut and an MA in International Relations from SOAS/University of London.

"One of the poems I like the most is by Ahmad Shawki, the celebrated Arab poet: Rise up to the teacher and pay him his dues of respect and reverence; he (the teacher) could almost have been a prophet. Indeed, Prophet Mohamed had said it centuries earlier: “Scholars are the inheritors of prophets.” The Global Teacher Award reinstates that status of the prophet/teacher, gives the teaching profession the adulation it deserves, and brings to the fore role models to inspire, guide, and challenge all of us."