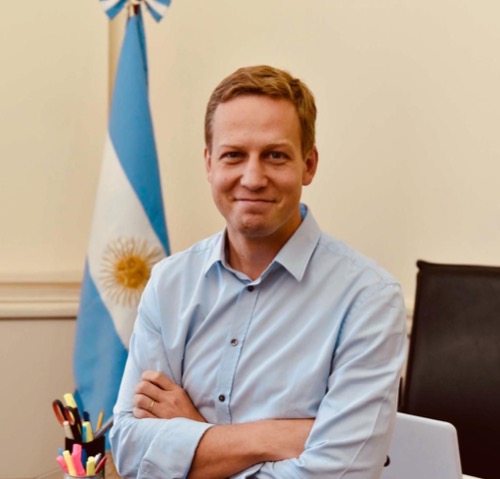 Director of the School of Teachers Ministry of Education, Buenos Aires, Argentina

Oscar Ghillione is an Argentinian public officer and social entrepreneur, dedicated to promoting and developing programs and public policies in Education.‚ÄØ

In 2004 he co-founded a social organization, Fundación Grupo San Felipe, that worked for 15 years in urban and rural areas with the highest poverty levels in Argentina: Añatuya, Santiago del Estero, and Barrio 31, Retiro, City of Buenos Aires. Over the years, this organization developed several educational programs. It offered higher education scholarships and mentoring for young students, as well as soft skills and human values workshops and professional vocational guidance. It also provided pedagogical training for teachers, organized annual “Olympics of Knowledge” and it built an Information and Technology Center.

The organization became a social and educational referent in the areas of work, and was the place for hundreds of young volunteers to converge and participate in actions that impacted the life courses of thousands of students from highly vulnerable contexts.‚ÄØ

In 2009 he left his job in the private sector to co-found, and lead until 2016, a not-for-profit organization called Fundación Enseñá por Argentina. It had a focus on education, and was a member of the global network Teach for All. This movement enrolled young professionals to become teachers of children living in poverty. Participants attended an educational leadership program that was developed to train these grade level graduates to be able to offer high quality education and to motivate their students to develop their full potential.

Fundación Enseñá por Argentina now reaches more than 15,000 kids and young people every day. It focuses on improving the way students learn in hundreds of schools in several Argentinian provinces, and it does this by collaborating with other teachers and the local educational community. It fuels an active network of more than 300 alumni that stay connected and committed to improving the educational system in Argentina, through collective leadership.‚ÄØ

In 2017 he was appointed Executive Director of the National Institute of Technological Education (INET), the federal entity in charge of all the technical and non-university higher education of the country. In 2018 he joined the Chief of Staff's Office to coordinate the ministries of Education, Culture and Labour. In 2019 he became Secretary of Education, within the Federal Ministry of Education, being responsible for the socio-educational policies of the country. Nowadays he serves as Undersecretary of Teachers Professional Development, overseeing Buenos Aires City teachers’ training and support.

Oscar is a BA in Business Administration and MBA, holds a Masters degree in Educational Policy and is a qualified high school teacher and university lecturer.

He was also a scholar from Fundación Carolina in 2006 (Spain).

He is a board member to numerous social and educational organizations in Argentina.

Oscar was a speaker in numerous events on social and educational topics. His participation in TEDxRiodelaPlata Educación, called “Professors that leave a mark” had more than 1M views.

Oscar is married to Luz and they have four children, Oscar (11), Francisco (9), Pedro (7) and Lucas (4). He lives in Buenos Aires, he is an active marathon runner and passionate about sports.